Norma
Preferring truth to custom, the better to the good, adapt to adopt, reform to revolution, solutions to goals, knowledge to awareness, faith to spirituality. The rules.

F.A. Hayek on totalitarianism of the Leftists

How should we conservatives think about race and critical theory, CRT; the misnamed gender affirmation or transgenderism; the climate change cult; abortion on demand at any stage of pregnancy; free and open borders ; mandates that didn't reduce the toll of the pandemic and had never been tried before? F.A. Hayek had some thoughts.

" Incredible as some of these aberrations [spirit of totalitarianism] may appear, we must yet be on our guard not to dismiss them as mere accidental by-products which have nothing to do with the essential character of a planned or totalitarian system. They are not. THEY ARE A DIRECT RESULT OF THAT SAME DESIRE TO SEE EVERYTHING DIRECTED BY A "UNITARY CONCEPTION OF THE WHOLE," of the need to uphold at all costs the views in the service of which people are asked to make constant sacrifices, and of the general idea that the knowledge and beliefs of the people are an instrument to be used for a single purpose. Once science has to serve, not TRUTH, but the interests of a class, a community or a state, the sole task of argument and discussion is to vindicate and to spread still further the beliefs by which the whole life of the community is directed. As the Nazi minister of justice has explained, the question which every new scientific theory must ask itself is: "Do I serve National Socialism for the greatest benefit of all?"

The word TRUTH itself ceases to have its old meaning. . . it becomes something to be laid down by AUTHORITY, something which has to be believed in the interest of the unity of the organized effort and which may have to be altered as the exigencies of this organized effort require it. p. 178 "The Road to Serfdom; text and documents. F.A. Hayek, 1944, 2007. https://press.uchicago.edu/ucp/books/book/chicago/R/bo4138549.html
Posted by Norma at 4/14/2022 06:46:00 PM No comments:

New and slightly used Bible study books being used in 2019

I'm in an (older) adult Sunday School class after church at Lytham Rd UALC; we're using "Hebrews (The people's Bible)" by Richard E. Lauersdorf. I'm in an (older) adult Bible study class on Thursday mornings; we're studying Hosea with handouts from Pastor Jeff. I'm in a women's Bible Study group on Saturday morning at Lytham Rd. UALC; we're using "God of Covenant, a study of Genesis 12-50" by Jen Wilkin (Lifeway Press, 2018) and as a couple we're in a SALT (Sharing and Learning Together) group using "Making sense of the Bible; rediscovering the power of scripture today" by Adam Hamilton (Harper, 2014).
Posted by Norma at 9/21/2019 11:50:00 AM No comments:

A Republic if you can Keep It

I'm loving "A republic, if you can keep it," (2019) by Justice Neil Gorsuch. In the introduction he introduces us to his roots and branches, some fascinating people. All of us should have to write a paragraph or two about parents, grandparents, great uncles, etc. and their challenges and contributions so we understand how we got here.

Of his mother (pgs 13-14): "My mother was brilliant and a feminist before feminism. Born in Casper, Wyoming, she graduated from the University of Colorado at 19 and its law school at 22. That was a time when almost no women went to law school. She studied and taught in India as a Fulbright Scholar and went to work as the first female lawyer in the Denver District Attorney's Office. There, she helped start a program to pursue deadbeat dads who had failed to pay child support, long before efforts like that were routine. Her idea of daycare often meant me [Neil] tagging along. She never stopped moving. When she ran for the Colorado state legislature, where she was soon voted the outstanding freshman legislator, she wore out countless pairs of shoes walking the entire district again and again. As kids, we just had to keep up. Later, she served as the first female administrator of the Environmental Protection Agency in Washington."

With a mother like that, how could he be anything other than a great lawyer and judge.

Labels: Neil Gorsuch, Supreme Court, Title: A Republic if You Can Keep It

I am offered a lot of books to review, and occasionally I accept. If you've been baffled by adolescent behavior--your pupils, your kids, your grandchildren, or even your own if you can remember that far back, this is the book that explains it, and why it's probably necessary. "Wildhood; the epic journey from adolescence to adulthood in humans and other animals," by Barbara Natterson-Horowitz and Kathryn Bowers (Scribner, 2019). I'm assuming that Barbara is the scientist and Kathryn the word magician, because it's both very learned, and easy to read.

Using the lives of four animals, Ursula the penguin, Shrink the hyena, Salt a humpback whale, and Slavc a wolf (plus dozens of examples of other animal species--salmon, bats, gazelles, seals, etc.) they provide a look at everything you see in teenagers from status, to anxiety, to bullying, to risk taking, to privilege to sexual coercion. Is your son living in your basement? If animal parents were that protective, the species wouldn't survive.

"Animals will suffer pain, forgo food, give up sex, and betray others just to ensure they've not left out or driven from a group. You might say that for social animals, status is like gravity. It's powerful and inescapable. It's invisible. It exerts an omnipresent force, and it molds how a creature moves through the world and behaves around others." p. 97

I'd been carrying 2 Barnes & Noble gift cards in my purse for a year, so today I stopped in and purchased, "A Republic, if you can keep it," by Neil Gorsuch, (2019) and "Call sign Chaos" by Jim Mattis, (2019). I rarely buy books, but these looked like keepers. In fact, I think it was Hugh Hewitt who said the Mattis book would still be read 100 years from now. I doubt that, but in today's environment a few months would be good.  So I’m calling them a present to myself, even though I think I got the cards for Mother’s Day.
Posted by Norma at 9/17/2019 11:39:00 AM 1 comment: 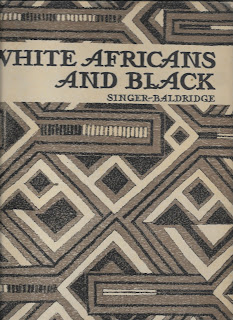 I bought this book in 2001 from the wonderful used book store (now closed) Acorn in Grandview because of the beautiful pencil and charcoal drawings. There are no whites in the book so I was a little puzzled by the title—the authors say it’s because all Africa was controlled by whites. Originally written in 1929 and published by The Methodist Book Deport , Cape Coast, Gold Coast,  it is extremely respectful of the beauty and culture of black Africa, but the authors comment on the presence of the Europeans and their culture throughout the book as they travel in Africa for 14 months.  There is an inscription in mine from the original owners: January 1945, Marilyn Phyllis Birch, A memento of our field of foreign service. Daddy and Mother (beautiful script).

One of the first things the authors mention is that photographs do not do justice to the shading and tone of African skin--but their drawings certainly do. The people are all beautifully drawn--very well muscled, graceful, and beautiful. They comment on relations between men and women, slavery (which had been outlawed, but still was obvious in 1929 as it is 80 years later), funeral customs, polygamy, religion, the culture of the "Creole" West Indians who had returned to Africa but weren't really African, food, bathing, language, work attitudes. The illustrator is Cyrus Baldridge, and  his wife, Caroline Singer is the writer. Her writing style is unusual. She uses almost no active verbs, lots of descriptive clauses, and sometimes word repetition, and so her writing develops sort of a calming rhythm. I would love to see something else they've written--and they did a lot of traveling,


“Quiet is the bedroom which adjoins our own, occupied by a swaggering hawk-nosed Kissi, his childlike wife and half a dozen retainers who, though slavery is by law abolished, differ racially from their employer and obey him, without servility, but still as people owned obey.  That the young man is Moslem is evidence not by robes and sandals alone—for many pagans assume this dress without derangement of their inner life—but by his pretty one’s abasement, which has a subtly meretricious quality.  She is demure.  But I think she is so designedly, not unselfconsciously as pagan women are.  It is often stated by the governing whites—despite the missionary’s protest—that any pagan, Moslemized, has made an upward step.  This child, littered with European jewelry of dubious gold, is set apart from other women here by a mincing self-consciousness, equalled only by the preciousness of half-Europeanized women of the larger coast settlements, unduly inflated by newly acquired monogamy, Charleston sandals, and coverings for their upper parts.  A favorite toy, chosen for her charms and not her usefulness, the girl, as if in fearful anticipation of the day those charms may pass, undetected from behind her husband’s back, plunges long glances into the eyes of passing men, searching for reaffirmation of their potency.”

https://www.lib.uchicago.edu/collex/exhibits/cyrus-leroy-baldridge-illustrator-explorer-activist/ If I were collecting books instead of giving them away, this is an illustrator/author I would try to locate. https://www.lib.uchicago.edu/media/documents/baldridge-C.pdf A WWI illustration from “ I Was There With the Yanks In France (1920), a book of sketches by the artist Cyrus Leroy Baldridge, who had served as a war correspondent in occupied Belgium and France before America even joined the war. Baldridge later joined the American Expeditionary Forces (AEF) and became the chief illustrator for the new Stars and Stripes military newspaper.”  https://library.wustl.edu/wwi-archives-dan-bartletts-books/
Posted by Norma at 2/18/2019 09:52:00 AM No comments:

How to Teach English Spelling


I used to think that if you learned a few rules for the exceptions, and memorized a few words that made no sense at all, English spelling wasn't that outlandish. Then I received this book to review. The author has 52 rules and 151 lists. And by my count some of the rules have sub-rules, like rule 20 for the suffix pronounced SHUN: tion, sion, ssion, tian, cian, cion, shion, xion, sian and cean. Because my computer often corrects me, I think my spelling has become impaired. I may be looking for a teacher who will give this one a good home after I finish it. 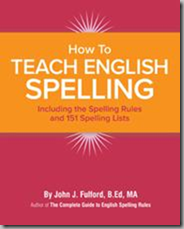